I joined the local YMCA. Not a huge fan of gyms, but living in Northeast Ohio doesn’t really give me much of a choice if I want to continue to workout and run in the winter (about eight months of the year.)

Yesterday I had just hit mile four on my little treadmill at the Y. I was feeling great. Awesome music, no one was next to me, I was cruising. I also happened to be in the very front of the gym (all the workout machines face one direction.) I was listening to Pandora on my cell phone, which was hooked up to my headphones obviously. Instead of carrying my phone like I normally do when I run outside, I set it down on the side of the treadmill where you put your water bottle. Suddenly I swung my arm down a little too violently and my hand pulled the headphones connected to my phone. I saw my phone go flying past me and get spun back behind me as it hit the running treadmill. It made a horrific sound. I only heard the sound because the force had ripped my headphones in half and my music cut off. Of course being in the very front middle of the gym, I had an entire audience to watch me pathetically stop the treadmill and go pick up my chipped phone and broken headphones that were on the ground behind me. 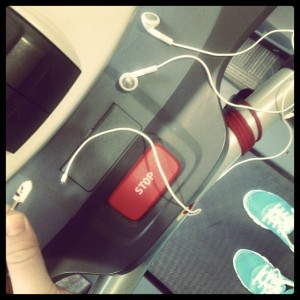 I tried to keep running after my little incident, but after another mile I just wanted to get out of there. I ducked out of the gym and into the locker room without making eye contact with anyone.

Then today I went to a spinning class (and boot camp after that with one of my girlfriends….OUCH.) When I walked into the spinning class this morning, there was an open bike right up front next to an older guy. I quickly took the bike without thinking anything of it. I mean it was a prime spot for the class! I also wondered why no one else had snagged it before I did. Two minutes into the class I knew why. The older guy next to me sounded like a train/rocket taking off. His breathing was so ridiculous I was practically laughing out loud. (He also had on a fantastic 80’s windbreaker suit.) However, about twenty minutes into the class I was no longer laughing. This guy’s breathing was so annoying and just insanely unnecessary. How do you tell someone to stop breathing so loud and annoying? I mean I could barely hear the music, we’re talking THAT loud and ridiculous. I now understand why no one else had chosen the bike next to him. And next time I’ll leave it empty too!

Does anyone else have any funny or weird gym stories? Please share so I don’t feel like a compete gym goon!