This week I feel like I struggled with finding my passion to train. I was tired, busy, stressed and it was cold outside. I just wasn’t into it and I took an unplanned rest day on Thursday. (Seems like Thursday’s are the days I tend to take rest days since it’s basically the end of the week and I’m drained by then.) Also I was running a half marathon that weekend, so I figured one rest day was probably good for me. 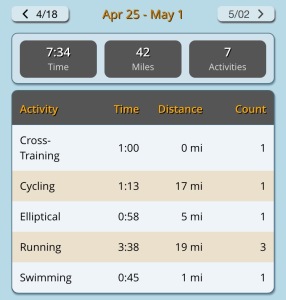 I did have a breakthrough swim this week and just thinking of it makes me hopeful and excited. I swam 1.1 miles in 45 minutes and still felt amazing after. I had a really good groove going. Everything felt smooth and robotic (which sounds like it should be bad, but it wasn’t – it was just working. I was like a well-oiled machine.) I did take a pre-workout before my swim sesh, so I have a feeling that might have helped, but I’ll take it!

I ran the Cincinnati Flying Pig half marathon on Sunday this week. I ran it for my first time last year and LOVED it. I always say I will never run the Cleveland Marathon again because compared to other races it really has nothing to offer. The Flying Pig is incredible – from the expo, to the course and crowd support, to the post-race festivities. 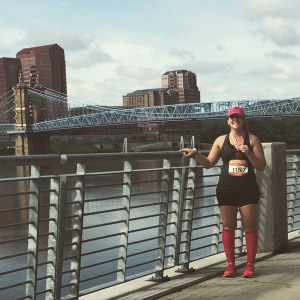 The course had decent hills between miles 6-9 and I knew they were coming since it was the same course as last year, but they still kicked my butt. I hit really low points during those hills – you know the low points where you question why on earth you ever started running and you start convincing yourself that you are never going to do this again and that you hate everything in the world at that moment (LOL). Come on, you’ve never had a tough race/training sesh if you’ve never had these thoughts run through your head! 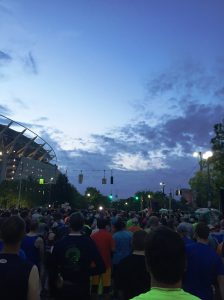 It was raining at the start, but luckily it cleared up fairly quickly. It also became super humid very quickly and because of the rain at the start and everyone was already wet from it. I later told my parents that I’ve never been in a worse smelling crowd during a race haha everyone was sweating SO bad because of the humidity. I also had some serious chaffing going on in the inside of my thighs – a bad combination of wet clothes, sweat and my shorts annoyingly riding up. A day after the race I could barely walk and I ended up taping the area, which looks like a terrible case of rug burn.

It was a decent race with a terrible finish time and I was happy to be done when I crossed the finish line. It was good training though and I was glad I did it!

This weekend we are headed down to Louisville Kentucky for the 142nd Kentucky Derby! We don’t actually go to the race track though, instead we hang around downtown, which is cheaper than purchasing race tickets and always such a blast!