This week was a pretty uneventful week in my little training world.

The entire city had Cav’s fever and I chose to sleep in not once, not twice, but THREE days this week after being out late celebrating the nights before. My consequence was having to train after work and just being totally exhausted. I still managed to keep some of the training magic alive, despite feeling very tired and distracted.

Here’s how the week panned out: 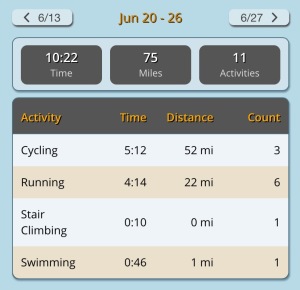 75 total miles and just over 10 hours of training. I didn’t take a rest day this week, but on Wednesday and Sunday I did a short 5K run both days and kept having to tell myself that it was OK. I used to think running anything under 4 miles wasn’t even a workout and that it was a complete waste of time. I think I came up with this idea somewhere in my full marathon training, but it’s time to get rid of that notion. It’s great active recovery and it was amazing to be done training for the day after just 30 minutes!

I was really looking forward to Saturday because my mom and I were doing a 30-mile ride with Lake Metroparks along the Lake Erie Harbor. It turned out to be beautiful weather and the sights were as promised. It was nice to cruise along in the sun while watching the lake as your view. 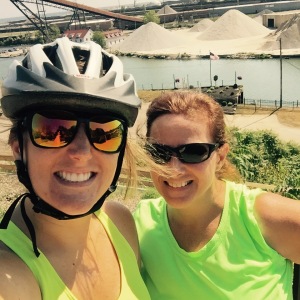 I took the world’s dumbest spill while out riding on Saturday though. I was going pretty fast, but we were off a deadend street so thankfully there were no cars around. I turned over a huge pile of gravel — like the kind you fill your driveway with — and my bike completely slid out from underneath me. I had no defense whatsoever and my feet were still clicked into my pedals. I caught myself on my left elbow and scraped it up. It looked worse than it was, but it’s still pretty tender a few days later. Note to self – be very, very careful on gravel.

I thought it was ironically appropriate that someone posted on the Cleveland Triathlon Club Facebook page about having a “Why am I doing this” type of week. I felt similar and was just so tired. I’ve mentioned before that I am following a free 70.3 training plan from pro-triathlete, AJ Baucco. He commented on the Facebook post and I thought it was worth repeating here:

“It’s all about balance and living “in the sport”. That’s the kind of stuff that fosters long term development. If you don’t train for a week, it’s just a week. 7 days out of thousands and thousands of days in your athletic career. The goal should always be to remain happy with the sport and eager to remain active.”

Let me reiterate that last part to anyone reading and needing a boost (myself included): “The goal should always be to remain happy with the sport and eager to remain active.”

I often wonder to myself “What am I going to do after the Ironman?” or “Do I think I will ever do another long distance race again?” or even “Will I keep doing triathlons after this summer?” …and I have no idea how to answer any of these questions and it can be overwhelming at times. I start panicking that I will stop working out altogether after the race and lose all my fitness and drive and just become boring. But when I read “…you should be eager to remain active.” That hit me hard. That’s what I want. That’s what I should aim for.

Even if I stop doing races or if I never compete in triathlons ever again — I still want to be active. I still want to keep swimming, biking and running because I love it and because it’s fun and because it’s good for me. I still want to go paddle boarding and rock climbing and zip lining. I feel better when I’m active. It makes me feel good and I always want to have that in my life. I don’t know what’s next after Ironman 70.3, but I do know that I want to be eager to remain active. That’s the bigger picture I should be chasing!