So far in the 17 weeks I’ve been training I have missed 2 hours and 10 minutes of training. I say this half sarcastically and half concerned LOL.

I was talking to a friend about Lake Placid the other day and she said “Feeling like my training can’t possibly be enough” and I’ve never heard more truer words! 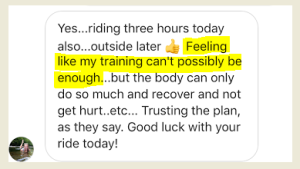 I know from what I’ve read and comments I’ve received that it’s common to always feel behind and that you aren’t doing enough when Ironman training.I guess it’s just a huge relief to know that so many other people feel the same way. It’s just so crazy. How can you possibly prepare the body for 140.6 miles in one day? HOW?! Will I ever feel ready? I know I have gotten stronger over the past 17 weeks, but I also don’t feel nearly ready enough.

Is there ever going to be a moment where I think “YES. Bring it. I feel ready.”?! Oh sweet baby Jesus I sure hope so…

Regarding my 2 hours and 10 minutes of missed training — two hours were separate 1-hour rides each and the 10 minutes was a long run cut short due to tsunami level pouring. (In my defense I was already running right past my house so I just called it quits a tad early.) 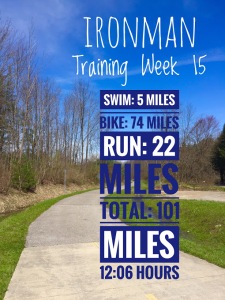 Week 15 was the second time I’ve ever rode my new bike outside. I was so excited to get out there and it was a beautiful day. I rode 62 miles and two of my friends rode the first 30 miles or so with me, which was nice. I was happy that most of the route was on a bike trail, so I felt safe and wasn’t just pedaling around trying to fill miles. I made sure to practice good nutrition too as I have a bad habit of not wanting to eat on the bike. This is really a priority for me — to nail down my nutrition plan for Lake Placid.

Also in Week 15 my mom and I went to a three hour bike maintenance clinic. (Figured this kinda made up for my 1-hour bike training I missed that day!) I feel so much better about changing a flat tire now, which thrills me as that is my #1 fear for the full. I still need a lot more practice, but I am getting more and more confident.

I finished up Week 16 on Easter weekend down in Cincinnati visiting my parents. I had to run 10 miles on Saturday so my mom and sister-in-law rode bikes while I set out on foot. Of course it started raining almost instantly as soon as I started, but I pressed on and actually felt really awesome during and after. 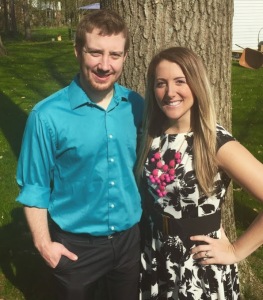 Hubs and I on Easter Day.

Now I don’t know if I’m just paranoid from hearing horror stories about other runners, especially recently with the woman in Seattle, but something weird happened while I was out on the bike trail. It was around mile 4 when I saw the same red truck at two different parts of the trail. Of course this section was not crowded and it had probably been 10 minutes or so since I had seen anyone. When I saw the same truck the second time (just sitting with the engine running in a driveway off of the trail) I started sprinting. My heart rate was through the roof. Part of me was saying “You’re being dramatic it’s probably someone just looking at their phone trying to find parking for the bike trail” and the other part of me was saying “Why is that truck near me again? Did it follow me? There is NO ONE around me and that is very bad”. I sprinted until I saw a few people and then I stopped to try to gather myself. I talked myself down and continued on, but decided to run without headphones for the rest of my run. It was a creepy feeling and I sure hope I was wrong and it wasn’t anything to worry about.

Despite that weird situation, the run was good and I finished Week 16 with a smaller mileage than the previous weeks.

This week I am focusing more on nutrition both directly in training and my diet during the day. I find I binge at night and undo all of the good, wholesome eating I did that day. I’m making it a priority to eat more clean and to only have ONE cheat meal a week. Nutrition is a balancing act with endurance sports. I’ve been on both ends of the spectrum — eating too few calories and bonking during workouts and eating too much and gaining weight when I’m averaging 80-90 miles a week. It takes work and sacrifice, but I know it makes a difference in my overall training and how I feel. This is my accountability post that I’m going to radar in on good nutrition!