SPOILER ALERT: They changed the course this year and although I only ran it once before in 2013, compared to last year, it didn’t meet my expectations.

I don’t want to be a Debbie Downer, but the race really did not meet my expectations this year. Maybe I set them too high though. Last year this was my first half marathon ever and the entire sport of competitive running was brand new to me. Regardless, I favored 2013’s course and I hope they switch some things around based off of people’s comments – because from what I heard – the hill during the last 1.5 miles was not a crowd favorite. I still love Cleveland though and I imagine I’ll be back next year.

The three amigos flexing at mile 3

Well… I’m doing it… My first triathlon! I’m two weeks out from The Great Western Reserve Triathlon on June 8th in Ravenna. Of course I’ll be doing the Sprint Distance – 750 meter swim (.46 mile), 13.1 mile bike ride and 3.1 mile run. I’ve been training for about three months and although I’ve gotten better at swimming in that time, I’m still incredibly nervous and intimidated by the open water.

This past weekend I did my trial run-through in which I completed the entire distance in all three sports. I finished everything (including transitioning) in 1:53. I set my goal to finish in around 2 hours, although I won’t be mad if I don’t make that time. My main goal here is to not drown during the swim! As soon as my feet hit the solid ground after that swim on race day I will be one happy girl! My trial run-through gave me confidence that I can compete in the swim, but I have a tendency to focus more on time and just trying to get it over with. When I think like this my form gets sloppy and I quickly become exhausted. As long as I remain cool, calm and collected and I swim with good form then I’ll be good to go, but if I panic and flop around trying to stay afloat I’m done for. Worrying about the swim has seriously kept me up at night lately, but I have to remain in control of my fears.  I have to go into the race with the mentality that I will beast mode that swim and it will be a piece of cake. If I think and believe that I can do, then I’m already half way there.

Lots of big races coming up! I’m so excited and nervous for all of them. Big things are happening and training is at an all-time high. (Is it weird that I get excited about waking up at 5AM to train!?)

This is what I love about summer – training and going out there and running your heart out at the race. I love summer and I love race season!

I think this might be the summer of races, and I’m not mad about it either.

I’ve ran a couple races the past three weeks and have so many more marked down on my calendar over the next couple months. The boyfriend and I seem to be in an official racing kind of lingo lately. There’s just something so exciting about running a race. The registering, the bib number, lining up, the mile markers, the crowds, the excitement. I love hearing pace times being yelled out, running along side complete strangers and the cheers as you sprint the last few feet into the finish line. Anyone who trains all winter on a treadmill is really missing out if they don’t run any of the races offered in the summer around Northeast Ohio. I mean we only get four nice months of weather anyways, so as a runner you better take advantage of it!

I ran a 10K in Northfield two weeks ago. You could run either a 5K or a 10K. All proceeds from the race went to stop human trafficking and it was put on by a local church. The race size was relatively small, but the route included mostly bike trail running and a few good hills. My mom walked the 5K and set a new PR for herself! I finished the 10K in just under an hour, which I was happy about. More info on the race can be found here.

Mom and I after the race.

Yesterday night the boyfriend and I got a group of friends together to run the Mentor Flag Day 5K. It was supposed to storm, but it actually only ended up sprinkling as everyone started to cross the finish line. The event included post race food, which was awesome. I set a new PR for my 5K time (26:45), which isn’t amazing, but the last 5K I didnt was in December and my time was 34 something, so I’ll take it. The race was on Wednesday night at 7 p.m., which I actually really liked after a long work day. This is a great family event too. More information on the race can be found here. 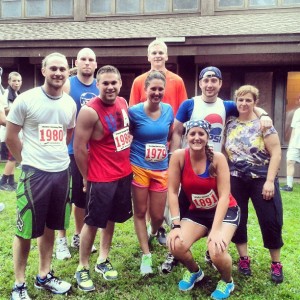 I really wanted to run The Lake Health Half Marathon this Sunday, but the race is sold out. Why they stop accepting entries? I’m not sure, but I’m pretty bummed. Plus the race was only a cool $50 compared to other halfs AND only 15 mintues from my house, but oh well.

This week marks 16 weeks out from the Akron Marathon. I’ve tossed around the idea of trying to run the full, but it’s not set in stone yet. I’m following a bare minimum training schedule for a full, but who knows if I’ll just stick with the half instead. The mileage is way down to only 18 miles a week right now, so it’s currently no big deal. We’ll see what happens I guess!

I hope everyone is taking advantage of summer and running a few races!