I’m being a typical girl when I say this, but where has the time gone!? I can’t believe it’s mid July already! Two seconds ago it was May 19 and I was running the Cleveland Half Marathon with an entire summer before me. Now I’m sitting here on July 16 with a full calendar of events every single weekend between now and Labor Day.

This summer has been awesome — even as I started my big kid job this past month and was officially welcomed into the 40+ hour work week. (P.S. What did I do with myself before I started working full time?!) So since I’ve been feeling like a real adult lately (although I could do without the car payment) my mom and I decided to throw a wine tasting party last Saturday. Pinterest was a huge source of inspiration – check out my Wine Tasting Party Board.

We sent out super cute party invites to guest (which I had a few pictures of, but two weeks ago I ran over my cell phone with my own car — and no, alcohol was not even involved surprisingly). We ended up having around 30 guest Saturday night, and the theme quickly changed from a wine tasting to more of a wine social. By the peak of the night, we probably had 40+ bottles of wine at the “tasting” area. 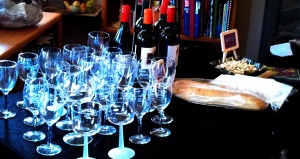 – Beginning of the night

The party was a blast though. We had grape vine lights strung up as decorations, along with cute wine quotes in pretty frames, plus the weather was gorgeous. The week of the tasting Chardon was actually going on 16 straight days of rain. It was miserable. But the wine gods were shining on us Saturday and the sun was out.

We ended up with a ton of food, even though we supplied a majority of it. Red velvet cup cakes with little frosted grapes on them (they took forever to make), veggie cups, homemade pepperoni roll, a giant platter of sushi, cheese and crackers and of course enough wine to fill a pond. Nothing was better than sitting out on a deck sipping wine with my best friends, gossiping and chatting about everything under the sun. My girlfriends and I all vowed to host a wine or BBQ event once a week from now on. Stay tuned as to how that one plays out.

Up next on the summer list looks like Painesville’s Party in the Park event this Saturday, followed by a 5-miler called The Johnny Cake Jog. The weekend after that looks like a

An overview of the decor

trip to Put-N-Bay, then Vintage Ohio Wine Festival and a Miranda Lambert concert. Oh plus I think I’m convinced the boyfriend to do a Biathlon with me on August 25. The Biathlon includes a three mile run and a 12 mile bike ride. Check out the 2013 Bellefaire JCB Biathlon & Walk.

Hope everyone’s summer is going just as awesome as mine. If you’re in Northeast Ohio like me — enjoy it now, because we don’t get to 85 percent of the year because of the snow.

I think this might be the summer of races, and I’m not mad about it either.

I’ve ran a couple races the past three weeks and have so many more marked down on my calendar over the next couple months. The boyfriend and I seem to be in an official racing kind of lingo lately. There’s just something so exciting about running a race. The registering, the bib number, lining up, the mile markers, the crowds, the excitement. I love hearing pace times being yelled out, running along side complete strangers and the cheers as you sprint the last few feet into the finish line. Anyone who trains all winter on a treadmill is really missing out if they don’t run any of the races offered in the summer around Northeast Ohio. I mean we only get four nice months of weather anyways, so as a runner you better take advantage of it!

I ran a 10K in Northfield two weeks ago. You could run either a 5K or a 10K. All proceeds from the race went to stop human trafficking and it was put on by a local church. The race size was relatively small, but the route included mostly bike trail running and a few good hills. My mom walked the 5K and set a new PR for herself! I finished the 10K in just under an hour, which I was happy about. More info on the race can be found here.

Mom and I after the race.

Yesterday night the boyfriend and I got a group of friends together to run the Mentor Flag Day 5K. It was supposed to storm, but it actually only ended up sprinkling as everyone started to cross the finish line. The event included post race food, which was awesome. I set a new PR for my 5K time (26:45), which isn’t amazing, but the last 5K I didnt was in December and my time was 34 something, so I’ll take it. The race was on Wednesday night at 7 p.m., which I actually really liked after a long work day. This is a great family event too. More information on the race can be found here.

I really wanted to run The Lake Health Half Marathon this Sunday, but the race is sold out. Why they stop accepting entries? I’m not sure, but I’m pretty bummed. Plus the race was only a cool $50 compared to other halfs AND only 15 mintues from my house, but oh well.

This week marks 16 weeks out from the Akron Marathon. I’ve tossed around the idea of trying to run the full, but it’s not set in stone yet. I’m following a bare minimum training schedule for a full, but who knows if I’ll just stick with the half instead. The mileage is way down to only 18 miles a week right now, so it’s currently no big deal. We’ll see what happens I guess!

I hope everyone is taking advantage of summer and running a few races!