I’m getting cabin fever. Or maybe I actually have it already. Either way, I might lose it if I have to stand in the cold and shovel snow off my car (yes shovel is the correct term) one more time.

AND it’s only the last week of February so chances are good that I will continue shoveling snow off my car for at least another month or so. At least daylight savings is coming up. Hopefully it will all be downhill with this Cleveland winter stuff after that. 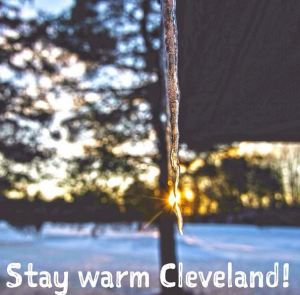 Last weekend I did 10 miles on the treadmill in a little less than two hours. It was awful, but it was also freezing and blizzarding out. I actually would have taken the treadmill over running in that crap any day. I hate running in the cold – and the rain for that matter, but what is the saying? “If you wait for perfect conditions you’ll never get anything done.” Woof. 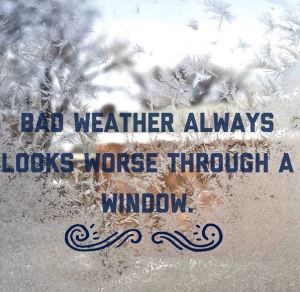 For a few weeks I was running 6, 7 and 8 miles on Friday mornings. It was so nice to get my weekly “long” run over with so I didn’t have to try to squeeze it in over the weekend. Now as training hits double digits it’s going to be harder to do that since I have to be at work at 9AM.

I’ve also been going to an awesome boot camp class religiously every Saturday for the past two months, but when I’m training I find it easiest to do my long runs first thing on Saturday mornings. I hate to give up the class, but not sure how I can time manage my training either.

Here’s to making it through until daylight savings – and hopefully spring and/or March!

Maybe a sign that spring is coming? Sunlight & stretching after my 5 miler yesterday morning.

Well the holidays came and went. December was filled with bridal events for my best friend’s wedding, endless Christmas parties and an awesome New Year’s Eve Celebration to top off the year.

The fiancé got me a Garmin Forerunner 15 for Christmas and I was thrilled! I’ve used it a couple of times and let me tell you how much I love it! It is SO much easier to just glance down at your wrist to check your distance rather than fumble around with an app on your phone (and your armband).

The end of one year and the start of another always means looking back at the year you’ve had and what you hope to accomplish in the next.

I did 16 races in 2014, adding up to 142.8 miles. I know those numbers don’t mean much to non-runners, but to those who understand what it’s like to look back and remember every mile, every early morning, every sore aching body part – you know the feeling of accomplishment and also the feeling of wanting to crush that number in the next year ahead of you. 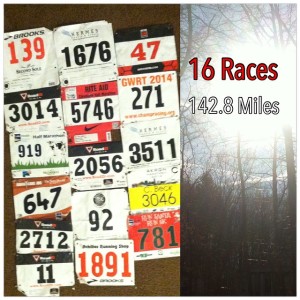 Looking back on 2014 my favorite race is a tie between the Akron Marathon (if you know anything about me you know I LOVE this race) and my first triathlon at West Branch State Park. The triathlon stands out to me because it was a goal of mine and I was petrified beyond belief to do the swim. I had no idea what I was doing. In fact, I still know very little about triathlons in general, but that’s what made the race so special to me. I went after something that scared the living daylights out of me and came out afterwards with a smile on my face. That’s living.

This past weekend was the Lifetime Indoor Tri. This was my second time doing the race so I kind of knew what to expect. I did so much better than I did last year, which makes me hopeful for the race season. I was not in very good shape either considering I haven’t swam since September.

This week marked the first week back to training since the holidays. I’ve got a big race schedule coming up and my training decreased in December (like it always does) with the holidays, parties and the wedding. It’s time to stay focused and become dedicated again, which makes me excited because half the fun of racing is training.

The weather in Cleveland has been cold and miserable, so unfortunately a lot of my training will have to be done indoors. Luckily I got a spin bike on Black Friday which is super handy on cold, winter mornings in Northeast Ohio, plus in training for the Olympic distance in July.

I’ve also held myself to two of my resolutions for 2015 so far – join Northeast Running Club and The Cleveland Triathlon Club. Done and done. I’m looking forward to group training sessions come spring!

For now I need to focus on hitting all my training goals and working on my diet. Because eating cookies and drinking wine every day is only acceptable behavior in December 😉

I’m looking forward to 2015, especially because I get to marry my favorite person in the entire world in August! 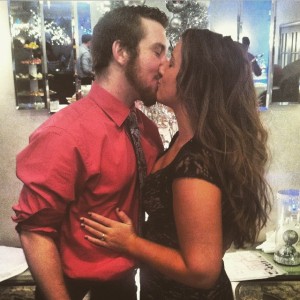 Honestly it might be one of my favorite months. I don’t know what exactly it is, but I’ve always loved the end of summer. Don’t get me wrong, the start of summer is incredible and filled with anticipation of so many events and activities, but the end of summer has a different vibe. The end of summer usually means being in top physical shape for us runners. After training all summer, the end of August should be your peak performance state. You should also be your tannest and happiest considering you just spent the last three months enjoying flowers and fresh air rather than dragging yourself through snow and slush! There’s just something about knowing you had an amazing summer behind you, but also knowing that there is still some more amazingness to squeeze out before autumn closes in. I always loved feeling the rush of the last few days of summer break before returning to school. Like in college when you spent all summer at home and then suddenly you got to pack up all your stuff and head back to have fun at school. The excitement, the nerves, the newness and the warmth of the summer encompasses everything.

For me now-a-days, the end of summer and watching it fade into fall means that the Akron Marathon is closing in. I’m so excited I get giddy just thinking about it. Last year I ran Akron as my first full marathon. I’ve said it before and I’ll say it again – it changed my life. No other memory can give me goose bumps and chills the way thinking about the Akron Marathon does. I loved every single beautiful, painful second of that experience, and I know only other marathon runners can relate to those feelings.  I’ve been doing my long runs on Saturday mornings and there’s nothing like waking up early, excited to run 15 miles. I guess that’s why they call runners crazy. I know I’m not alone in feeling like this though and I can’t wait to be around thousands of other people who felt the same way all those Saturday mornings during training. Running a marathon is an experience like no other and I absolutely cannot wait to get out there on the blue line again in 56 days.

August also means competing in the Bellefaire JCB Biathlon again. It’s a charity ride featuring a fast, flat 5K and then a 13 mile bike ride. Last year I won my age group and it was my first glimpse into the world of competitive biking. Speaking of bikes, I bought an amazing, fast touring bike from a fellow biker in Chardon about a month ago. I have yet to get clip in shoes yet though, so stay tuned for that. (I have visions of myself toppling over and unable to get my feet off the pedals.) I’ve taken the bike out on quite a few rides and every single time I’ve come back thinking “Wow that was fun!” Best feeling ever. 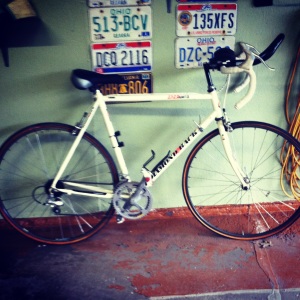 As if training for a full marathon and biathlon weren’t enough, I also signed up for my second triathlon in September. I’ll be competing in the Portage Lakes Sprint Triathlon in Akron on September 14. Yep – then two weeks later I’ll be back in Akron again, but this time running 26.2 miles. With that being said, other athletes can image and appreciate my intense training schedule. Most weeks I train 6 days a week, forcing myself to take a rest days on Sundays after my weekly long run. Sometimes I’ll cave and do a quick bike ride though. My diet and nutrition have been on point as well. Nothing is worse than eating a ton of pizza for dinner and then waking up early to get in a workout (especially a pool workout) and having that greasy pizza sitting on top of your stomach. It’s bloat city. I used to be naive and think that nutrition had nothing to do with athletic performance. (Yes I’ve now learned that lesson the painful way.) It’s still frustrating to me though when we are out at a bar on Friday night and my friends are drinking beer and eating burgers and I’m sipping on some water. Then someone makes some comment “Are you dieting? Why aren’t you eating!? Are you trying to lose weight?!” And I have to explain that I need to do a brick workout in the morning, AKA bike 10 miles and then run 5 miles and being even slightly dehydrated from drinking or bloated from eating a greasy burger just isn’t going to cut it. I constantly have to remind myself that not everyone understands the journey and that it’s OK because they don’t need to understand it.

So basically I meal prep almost everything I eat during the week. It keeps me on point and never in a position where I have to stop and get fast food. It’s a challenge, but then again this entire journey of training for 535263 events has been a challenge, but one that I wouldn’t give up for anything.

I only ran one race in July, which was a quick 5-miler in Painesville called the Johnnycake Jog. It was strange to only run one race last month though  because I ran a ton in June.

Even though training is at an all time high, we still found time to squeeze in our engagement pictures last week. Here’s a sneak peek.

PS. Just looking at these  I cannot stop smiling – we are so excited for NEXT August. Yes, we are even getting married in my favorite month 🙂