I signed up for the Lighthouse Triathlon in Fairport Harbor about a week before it. I’ve been wanting to do this race for a few years now, but I always seem to have something else the same day. This year I was able to swing it, plus it was one of the club races for Cleveland Triathlon Club.

Fairport Harbor earlier in the summer on a clear morning.

We ended up going out the night before on Saturday and I was actively watching the weather for race morning. It looked very likely to be raining when I woke up on Sunday. I figured since it was only $40 and since it was only a sprint, that if it was raining when I woke up then I would cut my loses and just skip the race. We were out until 1AM on Saturday night and when I fell asleep I figured I was more than likely skipping the race…

When I woke up at 5AM on Sunday it was 70 degrees and dry. I was a bit groggy, but I knew I would feel guilty if it wasn’t raining and I didn’t go. I had nothing packed, but got myself together enough to arrive at the beach around 6:45AM. The race was scheduled to start at 8AM. I hadn’t planned to wear my wet suit, but at the last second I grabbed it in case the water was cold due to the rain.

This is what your car looks like when you DON’T pack for a triathlon the night before and you throw everything together and hope for the best.

When I got to the beach it instantly started raining. Of course.

I tried to plaster a smile to my face and gave myself a pep talk. I was already there, no turning back now, so I made my way to packet pickup. This is such a low key triathlon that there was no body marking, nor were there numbers attached to your transition spot — it was basically first come first serve. The ankle timing chips were made out of plastic and I think I spotted only two porta-potties. It was fine though since registration was so cheap.

It started raining pretty heavily and my gear was instantly soaked in transition. I had a few plastic bags with me, which offered some assistance but not much. I was silently thanking myself for grabbing my wet suit because the wind and rain made the water quite choppy. I watched the waves nervously from shore during the pre-race briefing.

It was an age group start and my wave was at 8:15AM. We started in the water, which was pretty cold. I was racing with one of my triathlon friends, Kara, who had done this race numerous times before. She told me that because this race is really newbie friendly — which is great let me add — it just tends to make it a little more difficult for people who know what they are doing. (I.E. slow swimmers who don’t seed correctly, blocking and drafting on the bike, not getting over on the run, not setting up transition correctly, etc.) Kara told me to expect stuff like this all day, which I was thankful for because throughout the race I tried to have more patience for the athletes I saw committing these “crimes”. (This race also has a kayak option for newbies or people who want to compete but don’t want to swim.)

Got to race with my friend Kara for the first time this season!

The Swim: 12:56
The gun went off for the swim and right away I found myself in the middle of combat. In the five years I have been doing triathlon this was one of the most panic inducing swims! Newbie athletes thrashed about, hitting, kicking and pulling. No one was sighting correctly and zigged and zagged all over. Numerous swimmers were just treading water in the way. At one point I even heard a scream! It was a down and back course and when swimmers ahead of me made the turn around a buoy, they started swimming into the direction they just were and head on into other swimmers. It was mayhem. At one point I felt panic rising in my own chest as I was getting pulled down and swam over. I fought with myself  to get it under control because it was only going to be 10 minutes. I swam a little off course to be more by myself and things seemed to calm down a bit. Finally I could see the swim finish and I was relieved to hit the sand, even though it was still raining when I got out of the water. 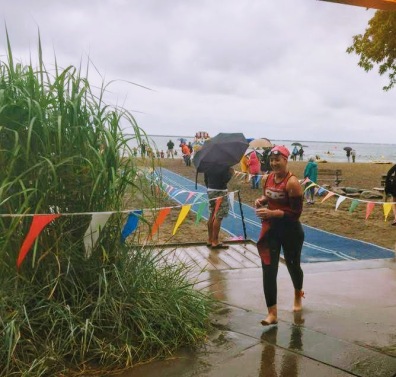 The Bike: 45:02
I couldn’t believe that a sprint triathlon bike was only 12 miles. (I hadn’t raced a sprint distance since 2015!) It felt like nothing. By the time I got warmed up it was over. It rained off and on during the bike, but it was a flat and fast course that I had ridden before. A couple times I found myself shouting (nicely) at bikers who were riding side by side or down the very middle of the road — making it difficult or impossible to pass. There is one big hill at the very beginning and end of both the bike and run and it was very slippery because of the rain. On the way back in from the bike I could see and feel my tires slipping on the road. It was nerve wrecking! 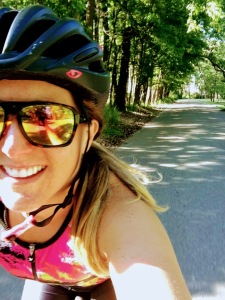 A picture of me biking NOT in the rain.

The Run: 28:45
By the time I reached the run I was pretty cold and I didn’t feel like running. I told myself to suck it up because it was only 3.1 miles. We ran another familiar route that I had run before. I saw a bunch of other members of Cleveland Triathlon Club and we all cheered for each other, which added some excitement. The finish line was small and uneventful but I expected it. It has been well over a year since I haven’t raced an Ironman or bigger event and I was used to pretty epic finishes. I almost forgot what these smaller races were like!

Overall: 1 hour 26 minutes
In general I feel like I would have enjoyed this race a lot more had it not been cold and raining. I also wish I had gotten a little more sleep the night before to push harder. I was happy to see teammates from Cleveland Tri Club, but happier to go home and take a warm shower. This race is an excellent newbie friendly triathlon and I will be recommending it to those looking to get into the sport!