What a fabulous weekend! I have had four glorious days off work — including tomorrow, too! Woo-hooooo. I have been quite the little outdoorsy girl on my mini vacay. I have been obsessed with squeezing the last remaining summer out of the next couple weeks, so I took my little break very seriously.

This past week I was on the cabbage soup cleanse, except not so much cabbage soup, however. I nixed the soup after day three, (it’s so terrible) and was still able to lose seven pounds — also while cutting the cleanse shorts two days! I have a goal weight in mind and to motivate myself, I bought a very expensive (but very pretty) Michael Kors bag. My reward and deal to myself is that I get the bag when I reach my goal weight. Stay tuned for that because this old girl still has six more pounds to shed. Until then, the pretty little bag stays hidden in the boyfriend’s closet at his place. (Cue the sad music.)

On Saturday, the rents and I made an adventure out of driving to Huntington Beach in Bay Village. The beach is award winning, clean, beautiful and offers a stunning view of downtown Cleveland in the distance. We stopped in Downtown Willoughby for dinner afterwards (hence, cutting my week-long cleanse off.) I opted for a burger and a beer, which was not to go unnoticeably awesome after eating straight fruits and veggies all week. 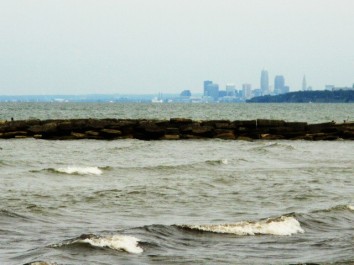 On Sunday, I was determined to go for a long bike ride to switch up my work out. After failing to get a companion to join me in the light rain that day, I set out on my own. I ended up being super happy about not having anyone with me because I decided to ride 27 miles and didn’t have anyone else to worry about. I cranked up my iPod and enjoyed myself. Note to self: Do that more often.

About half way through my ride I  stopped for a photo opt.

Sunday also called for a BBQ at the boyfriend’s house, which was a great time filled with Dance Revolution Two and a lot of trampoline bouncing. I felt like a little kid and loved every minute of it.

Today, Labor Day, I joined a group of 15 people on a canoeing trip. Half the group opted for a 7 mile kayak ride while the other a 10 mile canoe ride. Feeling like my normal superwoman self, I chose the 10 mile canoe.

And wow, did I underestimate that! Canoeing 10 miles is HARD. We looked up online how many calories each of us burned (my group had 9) and the calculator said I burned around 2,500 calories. I believe it too because my shoulders, back and arms are killing me! Great workout though, but really tough, especially with the hot sun beating down on you.

Some of the fearless canoers. 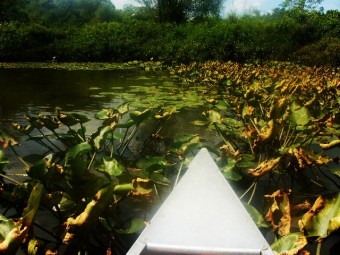 The boyfriend and I let the canoe coast while we ate fruit salad. We coasted into these lily pads, which our guide kindly let us know was probably infested with leeches. 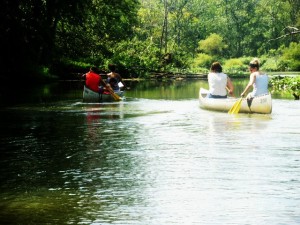 Of course I also had to get up early and run this morning before the canoeing adventure. So on the ride home I convinced everyone how many calories we had all burned and tempted everyone into stopping for pizza and beer. The calories were well spent.

Tomorrow I start back on my healthy eating though. After walking to get ice cream with my mom after we got home from canoeing, I stopped up at the grocery store and bought fruits and veggies with a heavy heart. Except I am kinda excited to try and get to my goal weight this week because I want my Michael Kors bag so, so, so bad! It was a good cheat couple of days, but back to the grind tomorrow. I’m getting up early to run seven miles up on the all-purpose trail and then stopping up to see my grandma, since I am of course the favorite grandchild…

Now I am sitting here in my pajamas drinking wine after a great couple of days. We are feeling the aftermath of hurricane Isaac tonight up here in Northeast, Ohio. I know I’ll sleep well tonight even with the storm.

Hope your weekend and Labor Day was as well spent as mine — on both time spent doing fun things with friends and family and calories spent on great food!