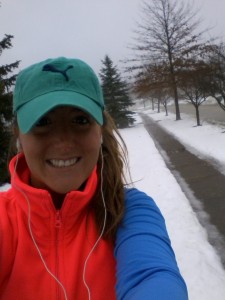 A little cold, but still braving the run!

I’ve ran outside twice in the past week! Yes, twice In Chardon, Ohio – the snow belt of Northeast Ohio. This is AMAZING! I have been going crazy running on the treadmill lately, or as I like to call it, “The Dreadmill.”

I’m on week 3 of 18 of training for my half marathon in May. I’ve liked the shorter runs during the week (2, 3, 4 miles) and the longest run on Sundays. I know it will not stay this quick and easy for long though. I got week 1’s long run in outside (4 miles), but last week’s five miler was on the treadmill at the gym, and it was terrible. I was going crazy. I was so bored and restless. How do people run huge distances on treadmills? I had to put a towel over the distance number because I was driving myself crazy looking at it and hoping and praying my five miles was almost up. That’s not the way I want to run though. When I run outside I very rarely glance down at my watch to check the distance. A couple weeks ago I ran 6.5 miles outside easily because I was enjoying myself. I don’t enjoy myself AT ALL on the treadmill and I’m afraid that’s really going to hurt me later on down the road when there’s six inches of snow and ice outside and I’ll have no choice but to use the treadmill.

By the end of both runs outside this week my feet were cold and my shoes were heavy because they were so wet from all the melting snow. It was terribly uncomfortable. I just wish it was warm outside. It would make training so much easier and not seem so much like a chore  somedays. Oh and to make matters worse, the only time I can get some runs in during the week is by going to the gym after work around 6 p.m. It’s so packed it’s unreal, plus there’s about 800 people from high school I try to avoid there. I’ve even gone out the side exit to avoid seeing some people. (It’s OK, you can make fun of me for that, I laughed when I did it too and so did my best friend when I texted her right after “You won’t believe who I saw tonight…” I guess that’s a girl thing.)

Somedays it’s a nightmare and a struggle to get on that treadmill. It’s probably going to be like that for a while. It’s going to get harder too, but then again it’s going to get easier at some point too. I try to remind myself that I’ve wanted to do this for so long and when I am running that route on May 19, I’ll be able to enjoy it and I’ll be so proud of myself.

Does anyone have any tips for treadmill running? Is there a secret to not going crazy while running long distances indoors? Please share! 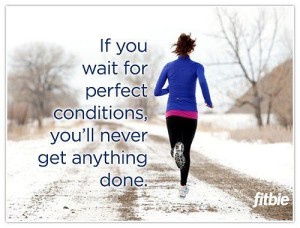